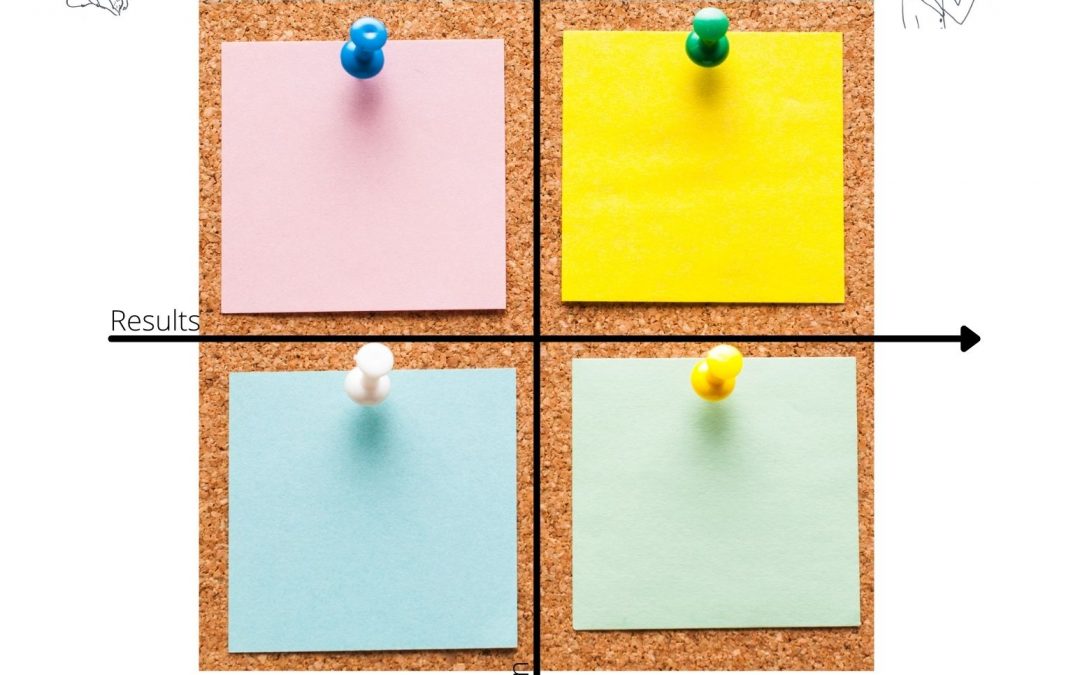 I participated in the Long Beach Area Chamber of Commerce Small Business Expo last week. It was the first one since the COVID closures. It was wonderful to be with people and talk to them about their marketing and promotional challenges and how I can help them.

I had a grid on display and asked people to plot their own experience on the grid. On one axis was the promotional activity that you undertake (a lot of promotion or very little promotion), on the other axis was results (great results and little results). The majority of people put their post-it notes on high activity and high results in various part of that quadrant. A very normal place to be. A smattering of post-its covered all four quadrants.

I spoke to each person as they considered where to report, many people declined. One person sheepishly stated, “I could do more promotion, but I do pretty well,” as he placed his name squarely in little promotion/great results. He was humble about it, even embarrassed. He should be celebrating!

That’s the goal! Wouldn’t it be great to have a ton of business with very little promotion needed? It is possible and this young business owner is fortunate to have reached this state.

How is it possible?

There are two common ways to achieve this. One is that the level of promotion over a considerable length of time created enough momentum that the business could coast with minimal promotional efforts. It’s the same principle of Fred Flintstone starting his car. He runs really fast first, then can just cruise once he gets going.

The other way is if the business owner has pre-established clout and authority in their niche. Popularity is good too. It’s akin to a lead singer leaving a stellar band and having a successful solo career. Sting’s first solo album, The Dream of the Blue Turtles, was the number two album on Billboard’s 200. This was merely two years after The Police’s final studio album, Synchronicity, was number one, selling eight million copies. I’m not saying Sting didn’t need promotion, they made a documentary about the album’s creation, but was that about promotion or another way to capitalize on his solo career? That’s a post for another day!

This idea that your current employed position with ‘the band’ will parlay into success on your own does not always work. Don’t take the leap without surveying the risks. Some people leave a company with a client. Re-read your contract and make sure you won’t be sued for doing that. Others only had clout because of their connection with the bigger firm, so don’t over-estimate your star status. Without that banner, do you still rock?

Even if there isn’t interest in capturing the documentary about your transition to a solo role, you might do fine, but need a little more promotion than you thought. Darius Rucker of Hootie and the Blowfish tells this story well. His exit from the band to pursue a solo career was in a different music genre (from pop to country). He started over as an opening act in venues that his previous band had sold out.

Not sure how this became a music blog, but these are good examples!

How Long Does it Take?

There’s no definite answer here. For some, your clients and projects will parlay into the next project, and the next, and the next. Keeping in touch with your network at weekly or monthly intervals is all it takes to stay top of mind. That can be through a combination of in-person and digital tools. Happy Promoting! I can help you.

Plot your own promotional activity on the graph to assess where you are.

Leslie A.M. Smith founded McCormick L.A. in 1994 offering public relations and marketing consulting to nonprofits and small businesses. She is the author of  Laws of Promotion. The 50-page promotional guide for small businesses and local nonprofits is available now on Amazon. Reach out with your questions about marketing and PR to be addressed here.