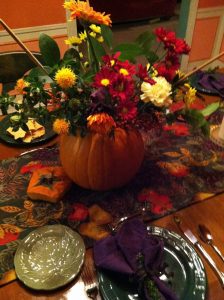 Here’s some Thanksgiving tradition––a short story to make us all thankful for what we have.

“Do you think we passed it? It’s just a tiny street?” Sherrie asked, her chestnut hair swinging forward brushing her shoulders as she peered through the windows of the minivan from the passenger seat.

“Street is an exaggeration. It’s a dirt road,” her husband Joel replied. “No, we haven’t passed it. It’s up here another few miles or so.” His plaid sleeves were rolled up, his burgundy sweater vest crumpled around his seatbelt.

“Are you sure? I think we passed it,” Sherrie adjusted her reading glasses and looked around again, small orange and brown turkeys jingled from her earrings.

“I’m sure. We haven’t even passed the restaurant yet,” Joel reassured and flicked his big, brown eyes at her, running his fingers through his short, red hair. There was one restaurant within 10 miles of Aunt Carol’s house. They didn’t visit her often, but every time they made the drive the restaurant had changed hands and had a new name. It had been everything from “The Buttercup Diner” to the “Goulash Hut.”

“Why do we have to go to Aunt Carol’s for Thanksgiving?” Greg asked from the backseat.

“She’s your great aunt, she’s my aunt. We’re going there because my mother died and we always had Thanksgiving with her. Carol wants to carry on the tradition and keep things the same,” Sherrie explained to her eldest son. He had just turned 15 and with his birthday came abhorrence for everything related to family.

“Yeah, but Grandma Phyllis was a good cook. Great Aunt Carol always makes weird stuff that Grandma conveniently forgot in the warmer,” Greg pointed out. His dad smiled at him from the rearview mirror.

“You caught onto that, huh?” his mom said with a guilty grin. “Well, it’s still nice of her to do this for us and keep things the same.”

“It’s not the same! Bobby and Dotty aren’t going,” twelve-year-old Steven said about his cousins.

“Watch your language! She definitely finds the kitchen a challenge, but it’s hard to really botch a turkey. You just have to baste it and keep an eye on it. If it’s dry, you just add extra gravy. It’s fail-safe, really. I just hope she makes stuffing and not dressing that’s cooked separately. I like it in the turkey,” he smacked his lips and patted his slight gut.

“I know your cousins aren’t going to be there. They have to go to their dad’s side of the family this year. It wasn’t Aunt Vicki’s choice. She wanted to be with us,” Sherrie explained.

Joel chuckled, “You sure about that? I think she got lucky here.”

“Here it is, the restaurant’s coming up,” Joel saw the sign in the distance on the right side. A large yellow sign with red neon read, Nell’s Fried Chicken, but some of the letters were burned out so it said, NELL’S FRIED ICK.

“Ha! Fried Ick—I think it’s an omen!” Greg said, “There’s a banner in the front,” he said craning his neck as they passed by, “It says, OPEN ON THANKSGIVING. Do people eat out at fried chicken places on Thanksgiving? That seems weird.”

“Hmm, maybe lonely people. I just don’t know how many people are out here. Better fried chicken than fried turkey, in my opinion,” Joel said. “The golden brown skin across the breast of an oven-roasted turkey, that crunchy char where the drumstick meat hits the bone … oh, I’m so hungry! I’ll even eat Carol’s cooking!”

“Here’s the turn, Joel,” Sherrie pointed to the left. “Don’t miss it!”

They pulled into the gravel driveway. “Now best manners, guys,” said Sherrie, “you too, Mister!” she said to Joel. “No complaints no matter what she serves. Okay?”

“Yes, dear,” Joel said and directed the family toward the front door of Carol’s ranch home. “We’ll be good, right fellas?” Greg and Steven each offered a small nod.

“Oh, you’re here! Perfect timing!” Aunt Carol met them at the door sporting a denim apron with an emblem of a large, rainbow-colored turkey on the bib. Loose, neon paisley print pants draped below the apron’s skirt, topped with a long-sleeved, orange thermal shirt. She had a large wooden spoon in her hand. “I’ve been cooking since six this morning. Look! I’m still in my pajamas!” She laughed. Her voice was high and whispery, like her vocal chords never developed past her eight-year-old self. Her hair was all one length and was a silvery grey that splayed across both shoulders, it was held back from her face with a simple black headband. If fairies aged, they’d look like Great Aunt Carol.

“Wow! That’s a lot of cooking and I think that’s what you should wear to cook Thanksgiving dinner. Don’t you agree, Joel?” Sherrie led.

“Oh, yeah, sure,” Joel agreed. “Carol, can I help you with the turkey … or anything,” he offered, rubbing his hands together eagerly.

“Oh, no, I wouldn’t dream of making you cook after your long drive. How long did it take today? A lot of holiday traffic?” Carol asked as she took Sherrie’s purse and the boys’ jackets and set them on a cherry-stained bench in the hallway.

“Two and a half hours, about average,” Joel said. The group followed Carol into her small living room where her sofa and chairs were all covered with clear plastic protectors. The boys knew not to ask about them anymore.

“That’s not too bad,” she sat on the arm of a gold-tone wingback chair. “I do so appreciate you making the drive. Family is so important and I miss Phyllis so much. I thought this was a good way to carry on her legacy.”

Sherrie wiped a tear from her eye, “Thank you, Aunt Carol, we are so grateful. Please let us help, what still needs to be done?”

“Well nothing really. I tried to make it a very traditional dinner and found a southern cookbook that had some recipes that just sounded terrific! I hope you like everything. Have you ever had hard-boiled eggs in gravy?”

“What?” Sherrie asked. Greg and Steven looked to their mom then to their dad and back again. Joel looked like he was about to gag. Sherrie knew that none of the men in her family liked hard-boiled eggs. That was one thing she was barred from eating in the house lest she hear them all making retching noises.

Carol laughed, “I know it sounds peculiar, but it’s a traditional southern gravy and it does taste wonderful! Who would have thought? So we will have some new things this year.”

The boys looked sick but Sherrie threw them a warning look and they changed their expressions to wavering half smiles.

“Um, Carol, what’s that smell?” Joel asked. Sherrie and the boys pointed their noses up to sniff and identify the aroma that was almost like licorice.

“I think that’s the fennel from the celery root casserole in the oven. Doesn’t the smell make you hungry?”

“Celery root?” Greg asked, “Isn’t that the part they throw away?”

“Oh, silly boy, it’s a wonderful part of the vegetable. This recipe has celery root, rutabagas, and fennel. I threw in a turnip just to add some zing!” she said as she punched the wooden spoon into the air in victory.

“Are there some other roots, like potatoes?” Greg asked. “Good, old-fashioned spuds?”

“I got yams, instead of boring old russets,” Carol explained. “White potatoes and white turkey is just so dull.”

“Mom,” Steven whined, looking at Sherrie desperately. He hated yams, they all did, even Sherrie.

“Well, okay, it does sound … colorful, Aunt Carol. I bet you used my mom’s recipe for her stuffing, didn’t you?” Sherrie stated, nodding her head pleadingly.

“Nope! I did an oyster dressing and added cranberries and walnuts, and I couldn’t figure out how to stuff the turkey, so I just cooked it separately,” Carol said. Joel’s shoulders slumped.

“Oh, I should have reminded you that Steven has a shellfish allergy. Well, we can make do. I’m sure it’s all wonderful,” Sherrie said, still trying to be positive. “Apple pie?”

“Mince meat! With real meat!” Carol said as the timer in the kitchen started to beep. “Joel, can you help me with the turkey?”

“Ah, sure!” Joel followed Carol and raised his eyebrows at Sherrie.

Joel grabbed a knitted hot pad from the counter and opened the oven. The root vegetables were bubbling in a yellowy broth with large chunks of fennel on top. “Where’s the turkey?”

“Well, it’s right here?” Carol said and banged her wooden spoon on a large stockpot on the stovetop.

“What the … ,” Joel opened the lid and swallowed hard. The large turkey was in the pot immersed in water with floating chopped onions. “You boiled it?!”