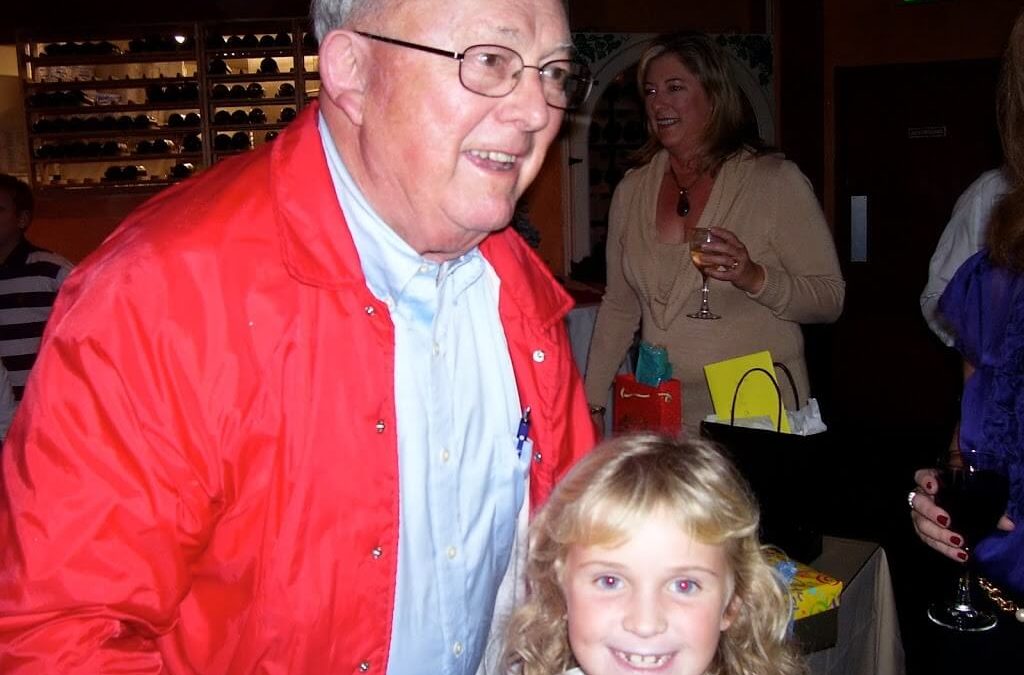 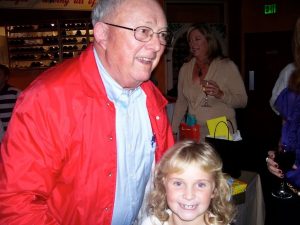 My dad turned 80 on December 7. He has always said he does not want to be a little old man who shuffles his feet and has a hard time maneuvering from linoleum to carpet. At 80, he is pretty darn healthy. He golfs once a week and volunteers at the church quite often. He has a good network of friend to whom he freely gives his time and energy. His physique would give Santa Claus a run for his money, but he still gets around very well.

My siblings and I had a surprise party for him Saturday night. My brother arranged to take him to dinner at his favorite restaurant for chicken piccata. They arrived with my nephew and sister-in-law and we could all see them come in as casual as ever. As my father turned the corner to the assembly of guests who yelled ‘surprise,’ my brother steadied my dad. Of course a risk of surprising even a healthy octogenarian is a heart attack. But no, he just gave us a dirty look that said, “What the hell?”

Stunned as he was he started recognizing faces and eventually started shaking guests’ hands. With about 40 guests from his working days as a bank examiner, his church family and his four adult children with their respective families, it was a really great party.

Chicken piccata was on the menu but ‘roast’ was the main event. All in good fun, of course, we told his politically incorrect jokes and toasted his sincere generosity and his somewhat crusty exterior.

Around the tables were signs that my sister and niece made that captured some catch phrases that are the lexicon of life with dad. Below are some of the most famous phrases and what they mean in our family lore.

1. “Dismount. Fight on Foot.” My father says this every time we park the car and need to get out. Get off your horse, stand and fight. It’s his personal version of “Brave heart.” You can draw your own Walter Mitty analogies.

2. “Move the ball around, hit the open man, play the good defense. Just trying to help the team.” This is of course, what any NCAA or NBA player should say when interviewed after a game. As well, this is the mantra that played in my head when I played basketball in high school. If only I got the ball, I would have done okay.

3. “Go to bed.” Easiest solution to any and every problem. If we had too much homework, a bad day at school or work, an argument with our mother – go to bed! Sleep on it and deal with it later if it didn’t magically disappear with the sandman.

4. “Good enough for government work.” This is when we got something done but it lacked any pizzazz or expertise. He ALWAYS offered this comment to class projects that were done at the last minute with limited resources—California mission building, science project volcanoes, various dioramas, etc. It doesn’t say much for the government-employed … or perhaps it says it all.

5. “Pert near out of strawberry glaze.” I’ll dissect this. First, ‘pert near’ is some sort of dialectal phrase that means ‘almost.’ He usually uses it sarcastically to mean we are nowhere near. Like when we have overestimated a recipe and made potato salad to feed an army—“we are pert near out of potato salad.”

Secondly, the strawberry glaze. There is one jar of strawberry glaze that he found in his cabinet many, many years ago. When my sister was in college and living on her own, she asked my brother one night to bring some food when he was going to go visit her in her apartment. My dad packed a sack of Campbell’s soup, maybe a loaf of bread or box of crackers and added the jar of strawberry glaze. Somehow that glaze made it back into the cabinet and has made many appearances since then. It’s been wrapped for Christmas, made it to Sacramento when I was living up there, and I think it is in his pantry right now.

In this case, one jar is pert near out, but will never be out.

8. “He knew the risks.” This is a new one that my father adopted from #2 grandkid, Allie. When Steve Irwin died tragically and somewhat ironically with a stingray to the heart, my sister and her husband were hesitant to tell Allie knowing she would be upset and perhaps a little afraid of the water after that. Instead she shrugged and said, “He knew the risks.” Logic trumped empathy.