Lying for the Greater Good 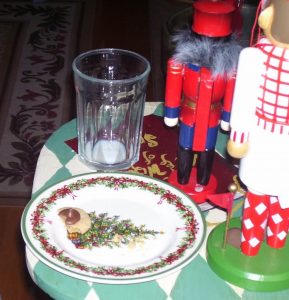 Face it, we lie to our kids. Some are little lies like, “I don’t know where that ripped and stinky nightgown that you outgrew three years ago but insist on wearing is.” When you know full well that you threw it out the last time you found it in the hamper.

Some are big lies like the most heinous one I have ever heard a mother tell her child, “You won’t like chocolate, it’s spicy.”

That wicked lie makes me laugh every time I share it. So clever and yet so dastardly to tell your own sweet child while Mommy unwraps another Ghirardelli square and savors it as it melts in her mouth. It wasn’t me, really!

The most common lies are the ones that we culturally agree are good. They have become universal. Santa, Tooth Fairy, Easter Bunny and any other figment of the imagination used to make parenthood and childhood more fun.

I loved imagining the Sandman coming into my room. He was a little guy on a flying carpet sprinkling dust that magically gives you great dreams. I think this image was in some old movie because I know my parents never gave me tequila or something else that might result in an image like that. Every morning there was evidence in my eyes that the Sandman had done his job and sealed my eyes for a great night of sleep. However, the promise of the Sandman’s magic terrified my little girl. In fact, so did Santa.

She liked the idea of some guy bringing presents, but she did not like that he was going to come into our house while we slept. It is somewhat burglar-like, isn’t it? In a Robin Hood sort of way. When she was one year old, Santa left the packages on the patio after we dutifully called the North Pole (AKA a puzzled grandpa on the other end of the call) to make that request.

Now my daughter is 10. It seems a little old to still believe in Santa but she’s not the only one. The other morning when I was driving carpool, the little boy I take to school – who is more intellectual than most men I know but talks about bodily functions as much as any man at any age – referenced what he calls the “Technology Elf.” Of course! The Technology Elf is in charge of all the techno-toys ordered into Santa’s workshop.

My seven year old quickly said with disgust, “There’s no Technology Elf – they just all build the toys!”

Wow! The more intellectual you are the more complex and organized your vision of imaginary things. How cool! He’s not above believing, he has constructed an environment to make more sense in a specialized corporate way. Genius!

In many discussions with my fellow moms we wonder if it’s time to let them in on it, but I think I’ll wait and let it slowly occur to my daughters and let them arrive at that conclusion in due time.

I think that the real reason for creating and perpetuating these wonderful tales that we do – with or without a Technology Elf – is to lead our children to faith.

It’s a way to teach them to believe in something that they can only imagine but we as parents are the masters and can control the outcome. They ask for a bike and we can guide their expectations and deliver if we approve. We can change the rules any way we need to so that our children feel their belief is worthwhile and keep the faith for another year.

It is one area where we can ensure there is magic in their lives and that there is a concrete system of reward for their good behavior. Sitting on Santa’s lap is almost a form of atonement, an opportunity for confession. Bless these wonderful children who have fit into their architecture of faith in Santa a need to have helper Santas in every mall and department store.

It is pure evidence that if we want to believe in something, we will create a world in our minds in which it can all be true.

As parents it’s easy to remember our duties on behalf of Santa Claus and the Easter Bunny, but the Tooth Fairy’s schedule is as bad as a random wedding anniversary. There’s no other trigger than that they lost their tooth that day. That’s it. Good luck and you better have whatever denomination in whatever shape you determined to be a tooth’s worth. Is it a gold coin or a $2 bill? Don’t get too fancy because there’s not always a lot of time to arrange the perfect gift and the pressure to remember to do the deed before you go to bed is enough. Forget about finding the special Tooth Fairy pillow or anything else.

The stories I have heard of why the Tooth Fairy forgot are amazingly creative but usually are very human reasons – overbooked, tired, sick kids, didn’t put it on her calendar, etc.

In my opinion some lies are worth the result. They add interest and anticipation to holidays that could be very heavy and not very childlike. More importantly they provide something a child can believe in and have faith in that they can understand. Why a giant rabbit would bring chocolate is a little weird, but the faith that it is possible is the important part of the message.