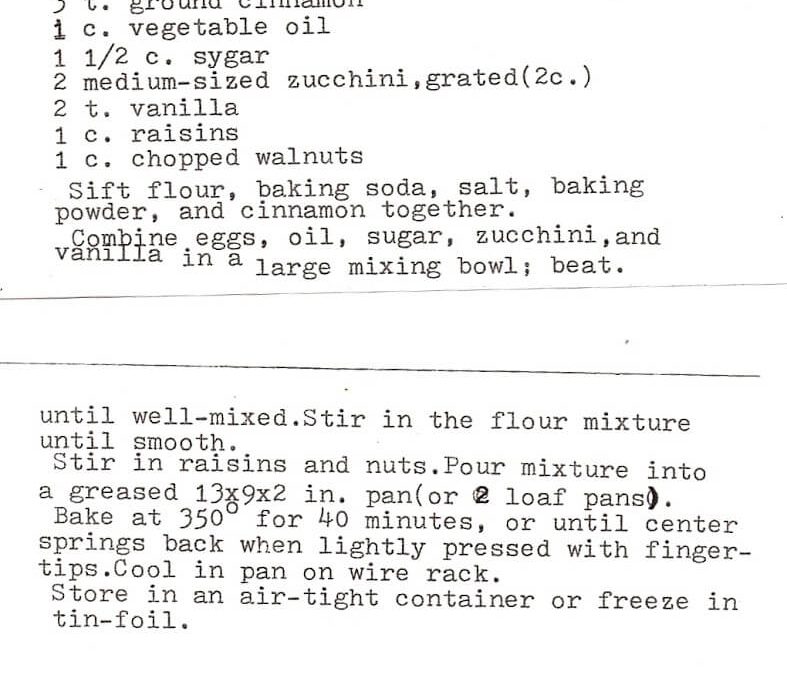 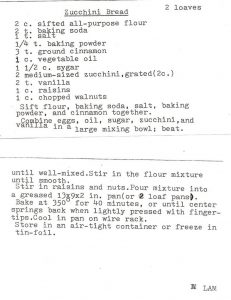 Carrot Cake. My daughter has wanted to make carrot cake all summer. By all means I want to encourage that healthy choice but I was without a recipe. My sisters and I have always just doctored-up cake mixes and made come pretty darn good cakes—a little extra spice, some fresh grated carrots, add raisins and nuts and it’s practically made from scratch!

But I did not want to use a cake mix with my daughter. Knowing what I know now, I just wanted ingredients that make a good cake and not a bunch of preservatives that make the cake mix last through a few nuclear wars.

While we were measuring walnuts and raisins I recalled the first time I made this recipe. It was with my mother. I was probably in junior high and she got it either from the newspaper or someone at work. We made it in a kitchen that was literally seventy-five square feet measured back to the walls—the cabinets, stove top, sink and refrigerator took up 30 square feet. The lack of space made the baking project seem huge.

Grated zucchini striped the counters and floor, sifted flour dusted the dish drain, measuring cups and spoons separated from their sets dotted all over the kitchen. After a long while of bumping into each other around the tight kitchenette, we got the two loaves in the oven. The apartment filled with the aroma of baking cinnamon while we did all the dishes by hand—no dishwasher.

The bread was delicious.

A few years later, when I had to put together a recipe box as part of my home ec class, I found the recipe and re-typed it. As part of the class there were some basics we had to have, a white sauce, a white bread recipe, and some other basics. We could earn extra points for more recipes in each category. Our teacher (the one who loved egg nog) encouraged us to share recipes with each other.

“Why not?” I asked. I wanted Janet’s rocky road candy recipe and I wanted Kim’s spider cookie recipe. I felt I needed to reciprocate with either the poco loco appetizers or the rice salad recipe.

“Because, you need to keep some things for your family and it’s nice when your friends feel only you can make it taste so good.”

“But mom, I’ve seen you give the rice salad recipe to people,” I objected.

“I always leave out the cumin,” she said matter-of-factly.

“Really?” I was shocked.

“Yes. That’s a very different ingredient that a lot of people can’t identify, but it is what gives that salad its unique flavor, so that’s what I leave out.”

“Don’t they figure it out?”

“They say, ‘I made your rice salad recipe but I think something was missing–mine just did not taste the same’.”

Scandalous! I was shocked. I’m not sure I totally think it is the best thing to do; it seems so sneaky. My own mother!

I kind of like the idea of going to a friend’s house and having all my own favorite dishes. However, I know that it is hard when someone else is getting compliments and accepting them for your graciousness, and doing so without so much as a footnote attributing at least a fraction of the credit to you.

It’s one thing if you have your name on a cookbook or two and get to eat your recipes at a friend’s house with the proof printed in a perfect binding, it’s another when there is no proof that the recipe had been in your family for several years. But should that matter? I don’t know.

I do pass on some recipes but not all. If I am tempted to leave out an ingredient, I don’t pass on the recipe. The cynic in me wonders if Ina Garten and Emeril Lagasse have held out and not included every ingredient in every recipe in their cookbooks. Are there some things they won’t share with the masses? I wonder.

That recipe card that went in my freshman home ec collection, typos and all, is what my daughter and I followed just this week. You can see it above and there is indeed, something missing. I assure you it was inadvertent, but you are welcome to the recipe. It’s great with zucchini, and now we know it’s great with carrots too. We realized the absent ingredient before we had gone too far and we corrected it.

Can you identify what is missing from the ingredient list? Trust me, you’ll need it. Leave your answer in the comment section, smarty pants.