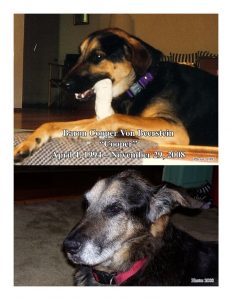 I have always fancied the idea that when I die, my friends and family should gather for an Irish wake. A girlfriend of mine shudders at the thought.

An Irish wake, after all, is not without mourning, but it also celebrates a person’s life with verve and happiness.

Thus, it has taken me a few weeks to be able to write about my sweet pooch’s passing the way I want to write about him. So grab a pint and read along.

My dog Cooper was the best dog ever! I am not saying that only because he is my first dog, but because everyone who ever met him told me so. They voted, he won; trust the process.

He was a mix of German Shepherd, Chow, and Doberman. We are certain he got the recessive genes of all those breeds—he was silly, cuddly, and humble.

He was loyal from day one. When we brought him home from the Seal Beach Animal Shelter, he knew he would be ours and we were his until the day he would die. He freaked whenever we took off his collar. He had been abandoned and seemed to figure out that a collar was a loving symbol of a family who wanted him.

I have worked from home since fall of 1994. We got him in January of 1995. He was a great assistant—or maybe more of a coach. With a sideways glance and perhaps a little sigh, he would remind me how ridiculous it was for me to yell at the fax machine. He would bark when the mail came and was just as excited as I was when UPS or FedEx brought a package. The letter carrier gave him a pat every day, and both the UPS and FedEx delivery personnel would bring him a dog biscuit and call him by name. They were all greeted with circle wags: a huge plume of a tail swinging 360 degrees like a helicopter’s rotor.

When it was time for a break, he would hit my elbow with his cold nose until I patted him. He would beg for snacks by sitting up regally and say please by gently putting his paw up on your hand.

I landed a client who wanted me to work from their offices a few times each week. My assistant could not come and he was angry and told me so. One day I came home to find he had grabbed one end of a freshly planted soaker hose and with it firmly in his mouth, he ran to the other end of the yard, tearing it out completely.

Not long after that, we had left him outside when we went to a hockey game. It rained and although his kennel was safely under the patio’s roof, and the door to the garage was open for his enjoyment, he dragged his 30-quart Rubbermaid food container out into the middle of the backyard. He managed to get the lid off, but instead of gorging himself on food, he just left the open container to collect enough water to make dog food soup.

After a few more bouts like that, I got to the point that I loved him more than brownies—the true measure of acceptance.

On the hunt, the dog never seemed to amaze us. While having a nice dinner for four out on the patio, Cooper brought us a treat. It wasn’t what was on the menu though. With his chest up and proud, and ears forward, he brought an opossum to the table. Fresh as ever! Not sure if he was dead, because … well … it was an opossum and playing dead is what they do.

Then there were the birds. The first time the dog caught a dove was when he leapt out our front door. “Cooper!” I called. He turned right around. Ears perked up again, tail wagging, almost with a swagger of pride and a dove firmly clasped in the dog’s mouth, one wing spread, eyes wide open, head bobbing around, fully alive.

Did I mention I was home alone?

“Out … out … ,” I said firmly but did not yell. He looked so disappointed but obeyed and slowly let the bird out of his mouth. I brought Cooper in quickly so he did not grab the poor wounded bird again. Downy feathers outlined his mouth as he yawned and licked to remove them. The bird had a broken wing and was stumbling in circles. I took care of that and will spare you the details.

On a few occasions, birds came in the house. One time he got one. Dennis was home, thank God. Having had dealt with the dove on the porch, I locked myself in the bedroom and turned up the TV to pretend the unpleasantness was not happening.

“There were so many feathers!” I heard my husband’s muffled voice through my covered ears.

Then there was Cooper’s bird. A bird smaller than a dove, bigger than a sparrow, had made a nest above Cooper’s kennel that sat in a corner of our patio. Cooper left that bird alone–completely. It was Woodstock to his Snoopy. One day, while Cooper was lying just inside the backyard door, his bird took a wrong turn and flew into the house. I steeled myself for another bout with a bird.

The dog looked up and watched that bird take a loop around our living room and fly out, turn right and perch in its nest. Cooper’s collar slid on the hardwood floors as he dropped his head again as if in relief. He had a pet.

I joke that the dog saved our marriage. We had only been married three months when we became his parents. Until then, my “morning person” husband would wake up way too early and eagerly ask, “Are you awake?”

Then he’d tap my shoulder.

Enter Cooper. Dennis gets up, takes the dog for a walk, comes back, the dog jumps on the bed and warms my feet while Dennis reads the paper and drinks coffee in another room of the house.

On the walks with Daddy, Cooper learned the command “Tree Law.” If he began to wind the leash around a tree, Dennis would yell, “Tree Law!” and Cooper figured out how to follow the lead back around to the route he should be on.

Years later when I was pregnant, Cooper still slept with me and enjoyed the benefits of pregnancy. I would wake up in the middle of the night absolutely ravished. Rather than wander down to the kitchen to find something to eat, I kept granola bars and ginger ale on my bedside table.

The crinkle of the wrapper would wake Cooper and he would beg. He gained 10% of what I gained during that pregnancy. He liked it and he liked what was to come–the baby, baby snacks and table food.

Without the dog these last few weeks, we realize how much he did his part to help clean the house. The crumbs seem to be everywhere. We raised two toddlers without ever having a splat mat under the high chair.

He definitely had his favorites: macaroni and cheese topped veggies every time, and he grew tired of Cheerios.

One day when I had brought a friend’s toddler home from tot lot with me, the dog jumped in the minivan with me to get the car seat out when her mother came to get her. He went to town on the Goldfish crumbs, bits of French fries, cookies and spilled juice. Nirvana!

When Dennis came home that day, he stopped one foot past the threshold and shouted, “Where’s my dog?”

Although the girls and I had assumed the dog was napping somewhere and was kindly avoiding getting into our craft supplies, he had not come to greet Dennis, which the dog did every night.

“Oh no! He’s still in the minivan!” I realized. It had been two hours. There he was, sitting in the driver’s seat just waiting for the keys. The floor and seats were clean, and I was in the doghouse. Oops! Good thing it was a cool day.

As the kids got older and more snacks were packaged to go, Cooper deduced that things in plastic bags were good eating. He hunted through backpacks and couch cushions, then graduated to trashcans and low cupboards. We don’t keep food in any low cupboards and the kitchen cupboards close tight—some still with baby-proof closures. But in the bathrooms, Cooper thought that good smelling soap in cellophane would likely taste as good as it smelled.

He had gotten a little braver in his old age. It has been years since he could get up on the bed, and about a year that he could not make it upstairs anymore. With limited mobility, he had a new bravado to push the envelope. He was taking liberties we perceived as saying, “Oh yeah, what are you going to do about it?” He didn’t have that sorrowful slunk he used to get when he had acted out of turn. He ate Butterfingers (wrapper and all), and food off the table while we were sitting right there. I know he was losing his hearing but I am quite sure he ignored me several times to walk around the front yard a little longer.

Two weeks later, I am still picking up tufts of his hair. I am not sure where they are coming from, but we suspect that the dog hair will be here long after the pine needles from this year’s Christmas tree.

He was a wonderful dog and afforded us so much affection and laughter. There will never be another Baron Cooper Von Beerstein.