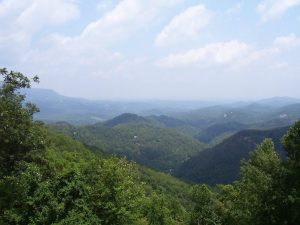 I am so glad I live in Southern California! Nothing confirms this more than a recent trip to Tennessee. Granted, I did not go to Nashville or Memphis, which I would still be interested in visiting, but the part of the Volunteer state I saw was beautiful but lacked direction–literally. I will give the benefit of the doubt to other areas of the state. Believing Sevier County is indicative of all of Ten-A-C is like believing Colusa is indicative of all of California. It ain’t.

I attended a family reunion held at The Preserve Resort in Wear’s Valley in the Smoky Mountains. Neighboring cities are Gatlinburg and Pigeon Forge. The Preserve Resort was beautiful, but one trip down the main drag in Pigeon Forge clarified a comment that a Knoxville native made while waiting for our delayed flight in Atlanta. When I told her we were going to Pigeon Forge, she said, “I am so sorry!”

Imagine the Vegas Strip designed by second graders and you have a pretty clear vision of beautiful downtown Pigeon Forge. There is every tacky attraction found off the beaten track in every tourist city—even Vegas! There’s a Ripley’s Believe it or Not Museum, about a dozen miniature golf courses, a variety of challenging go-kart courses, some extreme carnival ride and bungee jump places, a hundred pancake houses that all have the word ‘America’ in their names, then multiple chain restaurants from glorified coffee shops to steakhouses, surrounded by outlets—the Jerky Outlet, the Fireworks Outlet, and best of all, the Russell Stover Outlet. Don’t ask why the stuff is on sale, it might take the thrill out of buying it so cheap!

The Preserve Resort is 2.8 miles up a road that wound round, dipped and climbed through woods and cabins with blind turns and a few forks. Although it was freshly paved, there were no lights. I was forewarned and always came back before curfew.

Wear’s Valley was not even on the map that came with the rental car. Alas, my eight year old could not navigate for me. That same map was useless in getting back to the Knoxville airport, and not just because I could not find the map. You take the 321 South to the 129 Bypass to the airport. The rent-a-car map does not show those two roads ever intersecting.

But I don’t think it is the rental company’s fault. I am pretty sure that the people who live there have never lived anywhere else. I am sure the only reason they have names or numbers on their streets was at the threat of losing federal highway monies. Those names are fake in their minds–just for show.

All directions, even the official ones on the resort’s website include landmarks instead of names. Instead of giving distance between turns, they use words like ‘soon,’ and ‘at this point.’ Translation:
Soon=17 miles;
At This Point=you just passed it.

When I got to this point and sensed that I had missed a turn to get to the airport, I stopped at a gas station.

“Yep, you missed it. Go back to the fourth stop light and turn left,” the cashier said.

“What is the name of the street at the fourth stoplight?” I asked, choking down laughter.

“It’s the 129. It’s right by Shoney’s Restaurant.” Of course, that famed tourist attraction, Shoney’s! How could I have missed that? The sad part was we just had lunch across the street at Aubrey’s—which had quite an impressive beer list. (Remember that next time.) If only there had been a sign at that intersection, just a drawing of an airplane and an arrow would do.

Laughing at the directions, I forgot which way to turn. By the second stoplight I called the rental car company to ask, “If I am traveling north on the 321 to the 129, which way do I turn on the 129 to get to the Knoxville Airport?”

His reply: “Do you see the Burger King?”

On the other hand, the cabins had full air conditioning, hot tubs, and Jacuzzi tubs in every cabin. Loaded with wireless Internet access, the cabins were better than a lot of Starwood resort properties and, in some ways, better than my own home. Not to mention, we had great cell reception. The resort even has a pretty nice website, but not surprisingly, the website does not include a physical address so attempts to get directions to the airport from MapQuest were futile. I guess the mailman knows where to take mail that is addressed, “Go right soon after the Fudge/Fruit Stand on Happy Hollow, follow the blue and white signs.”

Here is my personal L.A./Ten-A-C comparison list. Keep it handy if you ever find yourself in that part of the country. If you get lost, just turn right at Burger King.

L.A.
Streets are known by names

TEN-A-C
Streets are known by how many stoplights they are from where you are right then, and landmarks. But not good landmarks. There’s a difference from telling someone to get off the freeway at Dodger Stadium (where there are signs) compared to “turn left at the Advanced Auto Parts store.” Especially if there are two of the same store within a mile of each other.

L.A.
People who work in any capacity remotely related to the airport or an airport hotel, know the airport. I have never gotten a shuttle driver at LAX or a neighboring hotel or parking garage who did not have a better than average understanding of the airport and the surrounding area.

TEN-A-C
The Knoxville (Alcoa) Holiday Inn Shuttle driver (40-something year old woman) has never picked up anyone from the airport at the arrival terminal. She did not know what that was. I needed her to take us there the morning after being in the hotel to retrieve our rental car. She could not figure out why you check-in with a car rental place IN the airport and go to the garage to get the car. She kept taking me to the garage. “That’s just crazy. They really have this all screwed up!” she complained.

L.A.
Highways have signs. Lots of signs. Signs that tell you where you are, where you are headed and the next six off-ramps.

TEN-A-C
North 321, which takes hard right and left turns all over the state, is the same as 441 South. No wonder they call it the scenic route.

TEN-A-C
At the famed Dollywood amusement park, there are only signs for parking, more parking, coach & bus parking, and parking. How do we leave? There’s an exit sign at the exit. Ten-A-C Reasoning: We don’t need them on the highway, why would we need them in a parking lot? We tell you where you are when you get there. Soon.

In L.A. you can buy alcohol–all kinds, at liquor stores, grocery stores, food warehouses, and even some gas stations; affordably, every day of the week.

In Ten-A-C you can buy beer and wine at grocery stores on most days, but don’t hold your breath for an import beer. A bottle of Absolut that is $16.99 in SoCal is $32.00 at a package store in TN. Maybe they don’t know the medicinal qualities of vodka.

TEN-A-C
Anything you want deep fried. Even peanuts in the shells.

L.A.
The roar of the ocean

TEN-A-C
The roar of cicadas